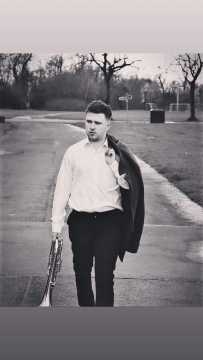 Craig's musical career began at the age of 6 when he started piano lessons, and by the age of nine, he had won piano competitions at various local music festivals, including Alderley Edge, Ramsbottom, and West Pennine. At the age of ten, he was appointed Resident Organist at Wharton United Reformed Church, Little Hulton, a position he has now held for over fifteen years.

He began playing Cornet at the age of 11 and changed to Tuba at 14 and has played for a variety of bands in his short career, including Astley Youth, Bolton Youth, Eagley, Tyldesley, Coppull & Standish, Faireys, Wingates and Marsden.

Craig was a member of the Junior RNCM from 2005 to 2008, studying tuba and organ, and was accepted to study at the Senior RNCM for a BMus degree, graduating in 2012. He began his PGCE course in September 2012, specialising in secondary music education, and graduated in Summer 2013.

He has held a number of conducting posts, including tenures as Musical Director with Ellenbrook & Boothstown Band, Stretford Band, Kearsley Youth Brass Band and Altrincham Concert Orchestra. He became Musical Director of Bolton Hoover Band in May 2014.

One of Craig's proudest achievements  was the formation of the 12-piece Integra Brass Ensemble, based in Little Hulton, Greater Manchester, which subsequently expanded into a versatile 15-piece group. Craig combines three main roles with the ensemble, as conductor, pianist and arranger.

Craig works as a private brass and piano tutor in the Bolton area, and is sought-after as an accompanist, for soloists and choirs alike, as well as being in demand as a solo pianist and organist. He is a music teacher and Head of Instrumental Music at Reddish Vale High School in Stockport.